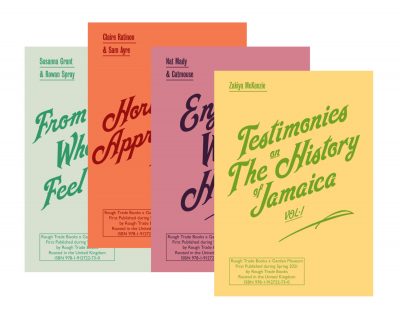 This conversation will explore the necessity and urgency of bringing a decolonial lens to the practice of horticulture – from the stories we tell about it to the language we use within it, how that shapes us as growers and gardeners and the dialogue around the gardens and land we grow in.

The idea of ‘the garden’ is a complicated, curious thing. They loom large in the imagination—a locus of desire, aspiration, colonisation, care, effort, property, land and ownership, loss and literature. Roughtrade have created a set of pamphlets that examine all of these ideas and more, with a group of writers and gardeners generating new work inspired in some way by our notions of all things green and pleasant, or perhaps less so. Has there ever been so much rich thought around the radical potential of gardening, with so much urgency surrounding how we maintain our little bits of earth, of the meaning that plants carry.

Horticultural Appropriation is a conversation between an organic food grower and an artist about the possibility and necessity of bringing a decolonial lens to the practice of horticulture. Taking place within West Dean College of Arts and Conservation, the exchange explores how attempts to decolonise collections and spaces currently happening in arts and cultural institutions might inform the interrogation of the colonial history at the heart of Britain’s gardens and gardening.

Testimonies on The History of Jamaica Vol.1: Or a General Survey on Things That Have Been Said About The Ancient and Modern State of That Island. English historian Edward Long became infamous for his 18th century polemic titled The History of Jamaica, a collection published in three volumes starting in 1774. Coming from one of the longest standing colonial familes established in Jamaica, Long’s books are riddled with justifications for exploiting slave labour and extracting value from plantations. Testimonies on the History of Jamaica is a piece of historical fiction exploring some of the environmental implications of Europe’s bloody venture into the ‘New World’. Set in Jamaica but speaking to all the Caribbean, the story follows what happened to land and native people when the Spaniards occupied, when the British invaded in 1655 and when the indigenous knowledge was removed from the island.